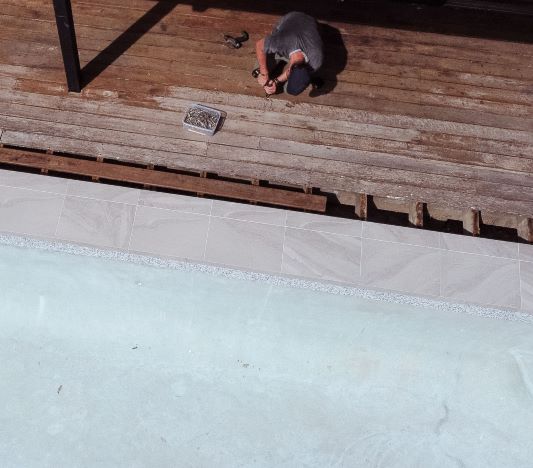 A JOURNEY WITH TREX part 1

The prospect of saying goodbye to the splintery mess we called our deck, seemed like a pipe dream for so long, and at around 120 square meters, the workload was something I was relishing in putting off. BUT, summer is fast approaching, and I needed this done NOW!!! I toyed with the idea of re-finishing the existing hardwood (spotted gum) and considering the timber profile was quite generous (135X30mm), the existing decking definitely wasn’t getting thrown in the skip. BUT, as a painter, I know that timber outside, in the harsh Aussie sun and getting constantly wet (saltwater pool + kids) was going to take a lot of upkeep. Most homeowners don’t realise that timber needs a protective coat every 6-12 months to retain surface integrity. Some timbers can be left to grey and weather, but not timber decking.

That’s where we partnered up with Trex Company. I hadn’t been the biggest fan of composite decking up until then, it all looked a bit ‘fake-timber’ to me, and while, YES, it still doesn’t look completely like real timber, the advantages far outweigh the fact that we’re losing that genuine timber look. We chose a light grey tone for our Trex deck because we didn’t want to take any glory away from our soon to be colourful pool, and we have plenty of timber tones in the eaves. The light grey, Trex ‘Gravel Path’, looks like a composite deck should, and we’re happy with that.

PLUS ….
It won’t warp
Deters any sort of White ant or Termite
It won’t split
It won’t splinter
AND I NEVER HAVE TO OIL IT!!!!!

Composite decks had always been notoriously hotter than their timber counterparts, but newer generation composites retain just as much heat as real timber and with the lighter tones in the Gravel Path, it certainly will help to keep the deck cooler in the Summer months.

We started dismantling our old deck, and it was apparent that the old beast hadn’t been built that sound. The hardwood deck had actually been used as a bracing, and we found out as we ripped it up that the whole sub-frame was wobblier than a plate of jelly. So, the deck was in itself a structural element and the subframe was without any blocks, most of the joists or any noggins. Taking the deck off was no mean feat either. We pulled around 7 kilos of stainless screws out of the hardwood, and I reckon around 10% of them were beyond what you would call stubborn. Plenty of screws were stripped, heads were sheered off and, in some instances, we just resorted to brute force pulling the boards up, screws and all.

Adam from ‘Kuwashi Built’ (a Trex Pro by now)  jumped on board and guided us (in saying that I meant, took the reins) and rebuilt the stairs and most of the subframe. He has worked with Trex before, so it was nice to have someone on board who knew what he was doing. He knew we shouldn’t butt join any of the boards, so we devised a layout of breaker boards (a decking board running the other way, to be the buffer between two joined boards). And once we had the subframe built, levelled, the layout planned AND the TREX Protect Joist Tape slapped down to protect the substructure and ensure it lasts a lot longer, it was time to lay these bad boys!!!